Book Release of Ever My Merlin and the Soundtrack! 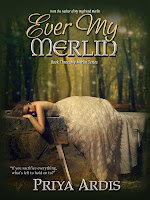 Announcing the release of Ever My Merlin and the Soundtrack


First (yay!), I’m happy to announce the release of Ever My Merlin on Barnes & Noble, and through other retailers. For those of you who’ve asked about the paperback (double yay!), it should be out in the next month.

Okay, now for something fun.  Confession time: I AM a soundtrack junkie. I obsess over movie soundtracks.  I love it when authors list it with their books. I might make faces  (or slight gagging sounds) at some of the soundtrack choices but for me it’s still interesting to see suggestions of the mood of the story.

I have a soundtrack for all three of the My Merlin books. Don’t worry I won’t list each and every song. It’s on my iTunes playlist (As soon as I can get Ping to work, I will post it!).  Below I’m listing some major sequences and the theme songs. I hope you enjoy it!

My Boyfriend Merlin
Theme song: Secrets by One Republic.
Why? This one was brought to me via a reader and I thought it was absolutely perfect for Matt and the whole book.

My Merlin Awakening
Theme song: Down by Jason Walker
Why? The struggle in this song mirrors the emotions in the book.

Ever My Merlin
Theme song: I had a tough time with this one because we have all three of the main characters with their individual growth experiences as we finish out the journey. But I settled on Ryan’s song because she’s at the heart of the story.

Blower’s Daughter by Scala & Kolacny Brothers. This one is Ryan’s theme song. Why? A beautiful song about looking back, looking ahead, and seeing the hidden truths

Opening sequence – Endings & the Bargain  Set Fire to the Rain by Adele
In the Cafeteria – The Hot Guy – Call Me Maybe by Carly Rae Jepsen
Campfire – Been A Long Day by Rosi Golan
On the Train - Too Much to Ask by Avril Lavigne
Last of the Romans – Viva La Vida by Coldplay
Garden of Eden – King of Anything by Sara Bareilles
Adam’s Peak – Wolf & I by Oh Land
Gods of Water – Till the World Ends by Britney Spears
The Good Witch – Keep Myself Awake by Black Lab
Acton-Concord High School – Tik Tok by Ke$ha
Prom – Take it Off by Ke$ha
The Lion and the Tiger – Praying for Time by George Micheal
The Abbey - A Thousand Years by Christina Perri (One brother); The Scientist by Coldplay. (The other brother)
Kronos’s Circle – Tik Tok by Ke$ha
The Fury – Into Dust by Mazzy Star
Ending sequence & Epilogue –With Arms Wide Open by Creed; Echo by Jason Walker

So those are my choices... like I said feel free to agree, make faces, or slight gagging noises. Do you have song suggestions for me? If so, leave a comment!
Posted by Priya at 12:59 PM